My sister spent years living and traveling in Mexico.  She was a dancer and musician especially focused on fandango and son jarocho, the folk forms of the Veracruz region.  Mexican arts and culture were central to her life.   She collected artisanal works as she traveled, both because of her personal love of the historical forms and also as a way to support and promote indigenous artists.

When she died, my brother and I sorted through her belongings which included many ceramics, especially those of that ancient form, the round, humble olla,  She had examples of the colorful colonial talavera style, as well as a range of black or earth-colored pots of more Native origin.

Some of these ollas made their way home with me.

Around this same time I started experimenting with acrylics. 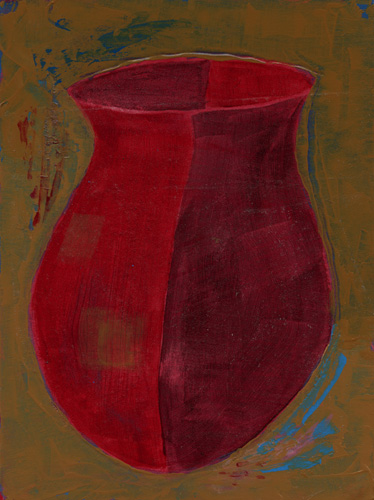 The ollas made a good, simple subject for still lifes, but I’m never able to stick with that form for long and after just a couple I was free-handing and abstracting them.  These two small studies were done on scraps of foamboard I had sitting around the studio, and involved palette knife as well as brush.

A year after my sister’s passing I began a small series of ollas on canvas in her memory; the first of them is at the top of this post.  They all used essentially the same palette and technique.  After laying down an orange ground I made a loose free-hand drawing, surrounding it with the blue and incising with the back end of the brush.

While she was in hospice my brother and I took turns staying with her during the night, sleeping on the floor of her one room.  Above me the shelves were full of ceramics and books about the art and history of Mexico.  And next to me on the floor, her favorite jarana in its case and, in a basket, several other jaranas that she would lend to her students – all instruments made by compadres in Mexico.

She was silent that last week, in a morphine dream, far away, her body getting lighter and lighter.  The daffodils she had planted were blooming all around the garden, and I would bring them into the room.  The daffodil yellow found its way into the last of the ollas I painted, for the day after her leaving: 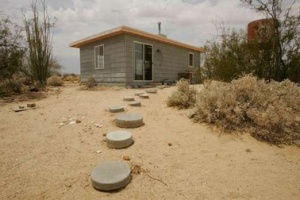 I’ll be participating in Open Studio Art Tours this October 16-17 and 23-24 in the Morongo Basin.  Details to come!