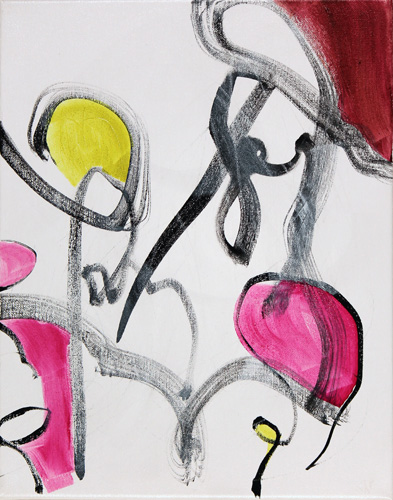 Our Dangerous Spring.  This image topped the very first post of this blog, and I’m posting it again because:

I created this painting in March of 2020, right as viral reality was hitting us upside the head, and in light of its timeliness I planned to show it in the members’ room of the Gallery in April.  But of course…the April show never happened.  And the cascade of cancellations continued, month after month for most of a year.  But, finally, here we are:  our dangerous spring has come and gone, and life and hope have returned.

And yes, it has been almost a year since I launched the Magicgroove: In the Studio blog (July 7, 2020), largely in reaction to the shutdown of opportunities to show and to interact with other artists and viewers.  My thoughts on this anniversary?  Well, I should tell you that in January, the half-year point, I drafted a post explaining why I was going to do away with it.  Obviously, I didn’t go through with that, but ambivalence has continued.  My patience with writing is not what it once was, and putting down the more complex thoughts that interest me simply demands more time and effort than I’m willing to invest.  A great deal that preoccupies me never finds its way onto these pages except in terms of the images.  Which is the point, after all.

Yet I believe I will continue, in this rather quiet fashion.  I so appreciate those of you who follow along with me.  But truth told, I’d rather just have the conversation in person, you know what I mean?  At least that’s becoming possible again.  🙂

Yes.  It’s been hot here.  Dangerously so.  Five days straight of 115-plus, sealed up in the house, blinds closed, cooler running around the clock.  Outside, plants and wildlife scorching, wilting, hanging on for dear life or…not making it.  I’ve kept irrigation running at a low level to provide damp ground for cooling bodies and small puddles for drinking.  The bird feeder has hardly emptied; the finches can only manage an hour or two at it in the morning before self-preservation sends them to find what shelter they can.  It is very, very quiet in the yard.

The studio cooling has essentially failed.  This latest swamp cooler has never cooled well, and in this heat it’s barely this side of useless.  I can get in a few hours of work first thing in the morning, if I rise very early.  That’s it.  Very frustrating.  But at least I can go in the house and be reasonably comfortable; many creatures are not so lucky.

The conditions in the studio are why the image of this painting is just a snapshot taken with my phone instead of a properly lit and staged photograph.  I have a backlog of work needing to be photographed, but that will just have to wait until climatic sanity returns.

“Drought, 115 Degrees” is on paper.  I’ve mostly avoided using paper with the acrylic paints prior to this; getting away from all the problems of paper was one of the reasons I turned from pastels to acrylics in the first place.  But it’s time to give it a decent trial, if I can find a satisfactory product.  I’ve started experimenting with Strathmore acrylic paper, and so far it’s pleasing me with the several small studies I’ve attempted.  It’s 246 lb, so fairly sturdy and not prone to buckle with the light treatment I’ve been using so far.  It has a subtle linen texture on the “right” side; this particular painting is done on the smooth reverse.  I like the smooth textures I’ve been able to easily achieve; common canvas is so rough the texture can dominate at this small scale, which can be frustrating.

I’m happy to say it’s cooling off, very noticeable today at a high of 107.  The creatures who’ve made it this far have reason to hope.  The plants, though, have gone the last year-plus with almost no rain, and even the hardy desert natives can take only so much.  Let’s just hope the winds don’t come up. 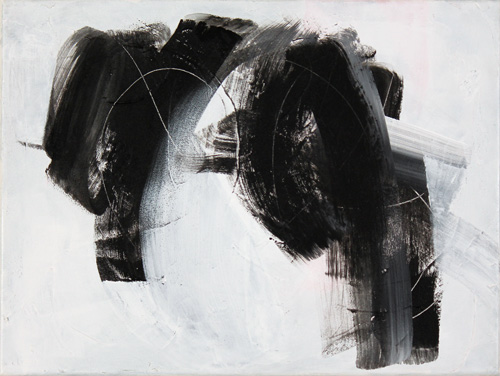 I’ve been spending quite a bit of time on several individual works in the Carbon series.  Some of the Carbons have come quickly; this one did not.  I started it late last year, and only declared it finished in May.  Over that time it changed almost completely; only some portions of the upper left remain from the beginning.  At one point it had a bright warm red figure – the result of a Hail Mary pass.  The remnants of red still glow beneath layers of white on the upper right.   I actually had decided that that version was the final, months ago, and set it in the stack for signing and varnishing.

It made an interesting painting at that point, with the red; I even had a title and a sort of alternate life for it.  But it wasn’t a painting I cared about.  When push came to shove, I decided to press on.

I spent a LOT of time looking, putting it aside, then pulling it out and looking some more.  I repeatedly painted over passages that I liked because they weren’t right for what was developing.  After I’d covered over the red I felt a strong connection with this painting and knew I’d be pursuing it, whatever it took.  Slowly it came into focus, but the final refinements still took a long time and lots of consideration.

Why am I telling you all this?  Must not be very fascinating to read, I’m sure.  But I’m having this experience increasingly – not with all my paintings, but with more and more of them.  Especially the Carbon series.  I’ve had several of those sitting in the stew pot for months now.  I believe it’s because:

So that’s progress, I’d say.  It’s a slow-moving but important development.  It’s changed my tempo in the studio, the varieties of control available to me, the depth of satisfaction I feel.  My commitment is deepening.  Which is good, because not everybody is going to like the direction revealed by works like Rough Trade.  So be it.

So there’s 12 of them so far, these mandalas.  I’d been working on them in late winter and spring, then actually set them aside a number of weeks ago.  I needed some distance before assessing.  Looking at them now, I believe several need more work.  We’ll see how that turns out.  But I’m feeling reasonably confident now that I’m on a worthwhile track.

Obviously I’m not staying with what is more popularly understood as a mandala, a “geometric configuration of symbols”.  I’m eschewing symbols completely, and “geometry” would apply in only the loosest interpretation of the term.  The idea of an “aid to meditation and trance induction” is maybe closer to the mark.  Whatever, as usual my approach is more poetic than academic, and the discovery of the purpose of my projects often comes after they are begun, not before.

Anyway.  Color is the founding and guiding element of these mandalas, and this particular one goes further than most of them in use of color.  But I should warn you that it was a challenge to reproduce the original colors digitally and this result is frankly exaggerated.  The actual painting is a little more subdued.  Satisfying, though. 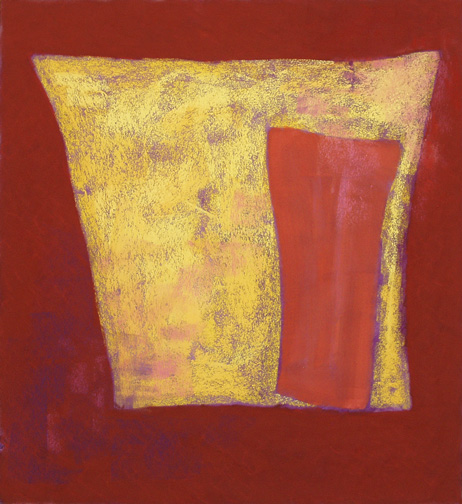 Saturday evening, after visiting the closing receptions at Gallery 62 and JTAG in Joshua Tree, we walked up the street to where a private reception was being held for Kim Stringfellow’s Jackrabbit Homestead installation at The Station.  The work was commissioned for Desert X 2021 and was trailered up the grade from Palm Desert when that site-specific exhibition closed last month.  The installation is a lovingly imagined recreation of the homestead of writer Catherine Venn Peterson, who wrote about her experience for Desert Magazine in 1950.

Kim has done extensive photography, research, and publication on the small-tract homestead movement, including multiple exhibitions such as at the Autry Museum in Los Angeles and her book Jackrabbit Homestead: Tracing the Small Tract Act in the Southern California Landscape, 1938-2008.  (The book has finally been reissued and is available for purchase at The Station in Joshua Tree.)

I met Kim sort of inevitably in the 2000’s as we were both deeply interested in the homestead cabins, their origins, and their effects in and upon the desert landscape.  Her work has been thoughtful, honest, and beautiful, and I’m proud to have been included in her JRHS project as, for example, part of the Jackrabbit Homestead audio tour and in this KCET Artbound segment, where I blithely blather in front of my studio on a witheringly hot afternoon where we had to take breaks to let the camera cool down.

I myself did a lot of creative work back then on the topic of the homesteads, including co-direction of the one-and-only Wonder Valley Homestead Cabin Festival in 2008 and a number of paintings.  Yellow Cabin above, from 2008, proved to be the last I was to do for quite a while.  But in 2015 I picked up sort of where I had left off, creating the deeply colored pastel collection Additional Dimensions:  Disappearance and the Homesteads of the Mojave using pencil sketches I had created at that time, in the mid-2000’s.

It’s very possible those were the final works I’ll ever do of the homesteads.  The derelict cabins that fascinated me truly are disappearing now, along with the peculiar homestead community where I found my place to be for the last 30 years.  It took a very long time, but the great consuming maw of late-stage capitalism has found its way to even this blighty little edge-world.

But, in the meantime, it was great to see Kim at the reception, for real and in person.  Over the covid time friends were in no way forgotten but did become unreal in a way.  Now, when we see them again it’s, like, wham!  They’re real, and alive!  No longer missing, I guess you could say.  A lot of things have been lost in the last year and a half, but not everything.  I’m so happy to find some things are still with us.