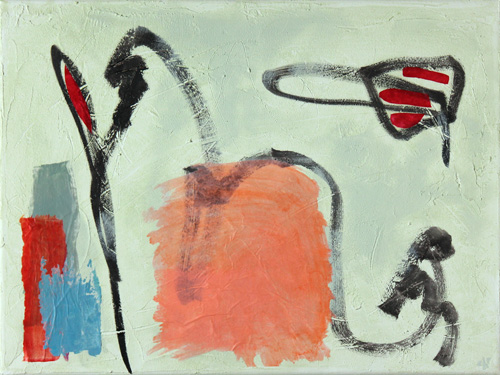 I frankly scorn cheesy play-on-words titles, but this title occurred halfway through the piece and wouldn’t go away.  So I accepted it.  Gotta say this painting really pleases me.  I liked the strength and simplicity of the initial gesture, which was done with a flat brush rather than the round I’d usually use for this purpose.  And I’m also quite happy with the muted gray-green ground over the texturing contrasting with the range of reds.

But mostly I like the ambiguity between abstract and narrative here.  It almost seems like there is a “tale”, but then again not really.  It fits inside the crevice between.  I feel no compulsion to figure out which it is; it seems quite complete as is, with no need to be one or the other.  I like that place.

Well, I finally did get some photographs of the new work.  This was one of the earlier pieces, from December, and it delights me.  This is the inside of my mind while listening to jazz, people.  Here you see what I’m really made of.  It’s like an x-ray of my synapses.

How it happened:  I drew with willow charcoal of two different diameters over a canvas texturized with my trusty Golden Light Modeling Paste.  I sprayed the charcoal with a workable fixative, and when the canvas was dry I stained it with a very diluted quinacridone gold acrylic paint, then brushed over in areas with more quin gold lightened with titanium white.

The collaged pieces are all deli paper painted with acrylic, and in this case I limited myself to bits I’d created specifically with the palette I’d chosen for this piece:  quin gold, quinacridone red, phthalo blue, and a little cadmium yellow. The more opaque paint bits had been applied to the deli paper with a palette knife; the translucent were more dilute and were brushed on.

This technique is basically what I’ve been using for most of the current works, of which I’ll share photos in the coming weeks.  On this one I put a lot of work into retaining the original feathery edges of the pigment on the collage paper; I think I’m getting better at that.  The earlier collages were rougher.

I get a lot of joy working with these shapes of pure color and combining them with a very textured colored surface and gestural line.  When the arrangement of these elements reaches a certain relationship the work springs to life for me and achieves a sense of inevitability.  Color me happy.

Well, true to form I got to a certain point with the still lifes and then totally ran off in another direction.  I started doing some collaging with translucent paper and have just been in a trance ever since.  I’m working hour after hour with full concentration and a kind of bliss, intensely satisfied with both the process and the results.  So much so that I have not stopped to photograph anything, so I can’t show you any of it yet.  I hope to attend to that this next week; we’ll see.

But in the meantime:  It’s a new year!  And I am of an age where these passages are as much about sums of the past as about the future.  And so I thought about this acrylic work I painted in 2019:  Pablo and Henri in the Lateness of the Afternoon.  I was stimulated, perhaps, by recently reading about Matisse, which inevitably brings one to think of the legendary connections and contrasts between those two titanic contemporaries, Henri Matisse and Pablo Picasso.

Ultimately respectful if not always friendly rivals, they were fierce observers of one another’s work over their long careers.  “All things considered, there is only Matisse,” Picasso once said, and Matisse responded, “Only one person has the right to criticize me. It’s Picasso.”

Pablo and Henri both spent the twilight of their lives at work on the French Riviera.  Matisse passed his final years in the Regina Hotel in Nice, quite near what was to become the Matisse Museum.  Many years ago I visited there, my companion and I riding a local bus up the long hill to where the historic villa housing the museum commands a view of the bay.  At that time the museum only occupied the upper floor and did not have a large collection of works, but it did have some key pieces of the artist’s props easily recalled from his paintings – fabrics, chairs, vases.  Seeing them displayed in the Mediterranean light streaming through the big windows brought a true shock of recognition, a shock both pleasurable and complex.  That sense of recognition extended through our long winding walk down the hill, with the views over Nice and the sea that Matisse made so familiar.

Perhaps 20 years later I took the train to the coastal town of Antibes to visit the small Musee Picasso.  It is housed right on the water in the medieval Chateau Grimaldi, itself built upon the ruins of the ancient Greek town of Antipolis.  Picasso used the chateau as his studio for 6 months in 1946 during a very prolific period, and ultimately donated all of the work that he had done there back to the chateau on the condition that it remain displayed to the public.  The collection when I was there included many of his most ebullient ceramics, a revelation in that ancient setting.  I also  vividly remember viewing the large, striking La Joie de Vivre, painted right at that location, its centaurs, satyrs, and pipe-players seemingly called up straight out of the Mediterranean earth beneath it.

Both of these experiences were a long time ago and I’ve forgotten most of the details, but the impression made on me was deep – of the art, the artists, and the elements all connected.  Over time I learned more about the connection between the two painters, their parallel careers, and their almost life-long arms-length relationship intimate mainly through their art.

Picasso occasionally visited Matisse during those last years when Matisse was mostly confined by ill health to his bed, from where he continued to work including on his last great innovations, his cut-outs.  Matisse told Picasso’s mistress Françoise Gilot at the time, “We must talk to each other as much as we can. When one of us dies, there will be some things that the other will never be able to talk of with anyone else.”

The losses of later life deepen and expand the significance of long relationships, of conversations that have lasted over many years, and their meaning and preciousness come to feel incalculable no matter how circumscribed they may have been.  I felt the mysteries of these connections – for you, for me – while painting of Pablo and Henri sharing their separate, lonely intimacy uniquely with one another as they painted their way into the eternal Mediterranean sun.