When I finish a painting sometimes I have some piles of paint left on the palette, so I’ll take a small, inexpensive panel like this one and use those tail-ends to do a little improvisation.  It’s one of my favorite things to do because I have zero load on it, no plan and no expectations – just “seeing what happens”.  I always learn something, and sometimes I like the results.  Like this one, which I like pretty swell.  The color is off-balance in this image, though, because the scanner couldn’t pick up the viridian – that dull blue should be a luscious aqua-green.  A summer palette.

This project – the Plague Faces –  has repeatedly been outrun by events.  But the dead, which they memorialize, are outside of time.

In mid-May the nation was “opening up”, seeming, to my amazement, to believe it could just move on.  On May 21 I created the first of the Plague Faces paintings, and I finished the last on June 16 – not quite a month.  The paintings were rushed, roughly done – a kind of accounting that couldn’t wait for refinement.  I posted the first of the Faces on social media on May 23.  By May 27 there were already 100,000 dead.

On May 30, as the protests against police brutality swept the nation, I posted, “In the short time I’ve been working on this series, the ‘crisis’ to which I referred has been subsumed by national emergencies of almost every kind. Mourning those who are dying in the pandemic seems almost a quaint sidebar. But it’s not; it’s one more tragic, unnecessary face of our disintegration.”  The losses in the pandemic reflect the injustices that have been with us all along.

And now we are at 137,000 covid dead and counting.  The dead and those yet to die are already lost to history, while we are doomed to still live it, because we are doing the single worst thing we can do for them:  not learn from their deaths.   When I started painting the Faces I could not guess at the future because the present itself was unacceptable, beyond comprehension.  But that time just barely past, as spring moved into summer, now seems a faded relic too exhausting to recall.  We are no longer suspended in disbelief as we slide toward the unknown.  We are now fully in the abyss.  We are in the embrace of the devil.

I feel a new set of Prayer Flags coming on.

One way to help those continuing to suffer loss:  Half the proceeds of sales from the paintings of the Plague Faces will be donated for covid relief. 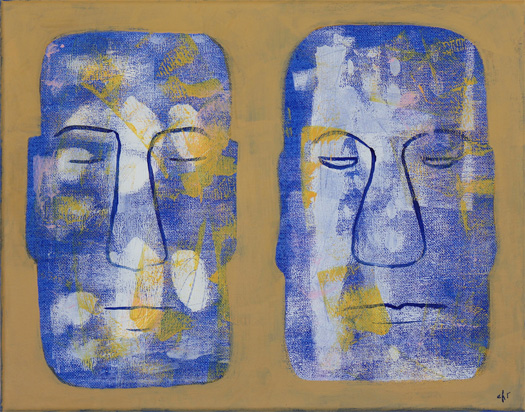 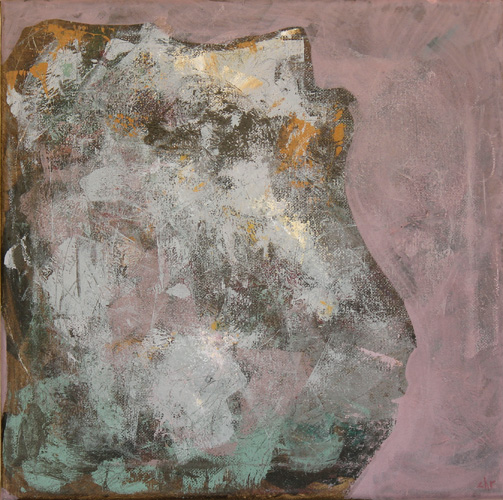 I’m inching towards a subject that’s been calling me for a long time:  the stone of the Mojave Desert.  Yes, those boulders of the luscious shape and provocative surface.  So far it’s just those elements alone:  the shape and the surface.  I’m not interested in the form.  So I’ve been playing around a little bit.  Got a long way to go.

So it’s not all pandemic gloom-and-doom here at Magicgroove studio.  There’s also pandemic hopefulness.  Okay, if not hopefulness then at least the sharing of positive intention and an interlude of grace.

The Prayer Flags series was created in March and April of this year, in that ancient time when it seemed all of us were pulling together, engaged in a common purpose and treating one another with generosity even amid chaos, suffering, and loss.  In that time before our leaders turned us against one another, and we realized that our nation, fatefully, was not capable of resisting the virus.

My work thrived with so much solitude, with the new opportunity to focus and explore in the midst of intense changes.  The prayer flags appeared, each one an improvisation, a mix of accident and intention.  Release of control followed by response, followed again by release of control.  I am perfectly happy working that way, despite the moments of apprehension. I know that forging ahead and letting go are necessary to get to a new place.

And people responded, somewhat to my surprise with abstract work.

You know what?  It was hope.

I want to be clear why I created the Plague Faces series.

By the time I’d returned home from the hike the four aspects of the project were forming in my mind:

Whether the actual works are successful artistically is its own matter.  But I believe firmly in the need to recognize the loss and the culpability.  Silence — and evasion, and denial — is death.

If you need a real-life face, and a family with the grief and rage of avoidable profound loss, see the righteous obituary for Arizona covid victim Mark Antony Urquiza of Arizona.  (Edited to add:  The Urquiza family social media campaign is Marked by Covid.)

I will be donating half the proceeds of sales from the Plague Faces series for covid relief.

I was hiking in the National Park just a few weeks ago, brooding about…things, and an image came into my head, of faces. The faces of the dead, those lives wasted in the pandemic by the carelessness of our leaders. I realized later the faces of the vision were related to the archetypal faces we see in stone on Easter Island, but, really, the simple model is basic throughout human culture.

This is the fourth version I did based on that impulse, and comes the closest to what I saw in that first moment. I did not mean to leave it without texture or additional color, but when I got to this point I realized I was satisfied, and stopped. It is, like so many of the Plague Faces, pretty rough as an artwork.  For instance, the interior ears were painted with a different black pigment and don’t quite fit in.  I tended to leave these works to chance, and skip any refining – kind of like what life itself does to us, and our faces.

Welcome, my friends. I have more time to paint now, and I’m feeling like talking about it.  That impulse, in combination with the currently limited opportunities to show and discuss the work in the regular contexts (it’s a pandemic, baby), have led me back to the blog format.  I’ll be posting intermittently about my experience in the studio, work in progress, thoughts on older pieces perhaps – the why, the how.  Also maybe some other artists I like, events coming up, and…we shall see.

I’ve debated leaving comments turned off but decided I’ll try it out and hope it doesn’t distract. But for sure, please do send me any thoughts or questions via the Contact page; I will be happy to hear from you.  If you want to receive new posts automatically there are RSS and WordPress buttons in the sidebar, plus an option to receive email notice of new posts. And please do check out my Magicgroove website, where you’ll find lots of my recent and past work and projects, press and interviews, etc.